A new book on statutory interpretation has just been published; it’s titled Reading Law: The Interpretation of Legal Texts and it’s by Supreme Court justice Antonin Scalia and usage guru Bryan Garner, who previously co-authored Making Your Case: The Art of Persuading Judges. 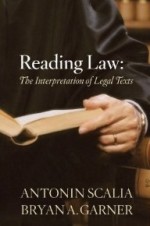 Scalia’s involvement in this new project isn’t surprising; he’s the leading proponent of “textualism” as a philosophy and method of statutory and constitutional interpretation, and he’s published a book on the subject. Garner’s participation, on the other hand, is something of a surprise. His writings had not previously given any indication that he had any special interest in statutory interpretation. Garner is most widely known as the author a usage manual (he’s actually written two: one on general usage and one legal usage). He has also written books of advice about legal writing and frequently lectures on the subject. And he is editor in chief of Black’s Law Dictionary.

It is Garner’s involvement that especially piques my interest. Like me, he is interested in language, and a significant part of the book deals with purely linguistic issues such as syntax and word meaning. But Garner comes at these issues from very different point of view than I do, the main difference being that he is generally hostile to the field of linguistics.

In the series of posts that will follow this one, I will look at Reading Law’s treatment of a number of language-related issues. But before getting into the details, let me give an overview of the book.

Like Scalia, Garner is a textualist, and Reading Law is in part a brief in support of textualism. But beyond that, the book seeks to do something about the fact that “many judges who believe in fidelity to text lack the interpretive tools necessary to that end.” (p. 7.) The bulk of the book is therefore devoted to setting out the nuts-and-bolts methods that the authors think should be used in interpreting legal texts. “Our approach in unapologetically normative,” they write, “prescribing what, in our view, courts ought to do with operative language.” (p. 9.)

Omitted-Case Canon. Nothing is to be added to what the text states or reasonably implies (casus omissus pro omisso habendus est). That is, a matter not covered is to be treated as not covered.

Series-Qualifier Canon. When there is a straightforward, parallel construction that involves all nouns or verbs in a series, a prepositive or postpositive modifier normally applies to the entire series.

Reenactment Canon. If the legislature amends or reenacts a provision other than by way of a consolidating statute or restyling project, a significant change in language is presumed to entail a change in meaning.

Although I described canons of interpretation above as “statements of rules,” that’s not really accurate; they’re more like presumptions. This point is expressed in the Principle of Interrelating Canons: “No canon of interpretation is absolute. Each may be overcome by the strength of differing principles that point in other directions.” (p. 59.)

Reading Law sets out 57 of these canons. These, the authors tell us, represent about a third of those that can be found in the case law. (p. 9.) The rest have been weeded out as being “incoherent, not genuinely followed, or in plain violation of our constitutional structure.” (p. 31.)

Scalia and Garner’s purpose in relying so heavily on canons of interpretation is to reduce as much as possible the indeterminacy and unpredictability of the interpretive process. If they could, I think, they would reduce the process to an algorithm. They recognize that that’s impossible, but they want to get as close as they can. “The sound view,” they say,  is that ‘statutory interpretation is governed as absolutely by rules as anything else in the law.’” (p. 61 (quoting a treatise from 1882)).

Coming up next: Prescriptivist statutory interpretation?

Disclosure: I have two points of involvement in Bryan Garner’s work other than as a consumer. An excerpt from a brief I wrote appears as an example in his book The Winning Brief: 100 Tips for Persuasive Briefing in Trial and Appellate Courts. In addition, as the first edition of Black’s Law Dictionary that Bryan edited was nearing completion, I was one of about two dozen people who were each given several hundred entries to proofread and to suggest revisions.

One response to “Scalia and Garner on statutory interpretation: Introduction”